Home » Uncategorized » Montague Ewing and Fairy on the Clock 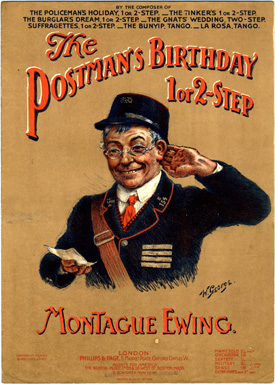 Montague George Ewing (May 21, 1890 – March 4, 1957), sometimes also known as Sherman Myers, was a British composer and arranger of light music, much which was used in films and broadcasting, who wrote many pieces with descriptive titles and was particularly famous for his 1911 one-step ‘The Policeman’s Holiday.’  Ewing was born on May 21, 1890, at Eastham in London, England, and was a self-taught musician. He worked in an office and wrote his compositional attempts on blotting paper until he was almost thrown out. As a composer and as a lyricist he published both under his birth name as well as under various pseudonyms, such as Rex Avon, Herbert Carrington, Brian Hope, Paul Hoffmann and especially Sherman Myers.  His specialty was writing and editing easy light music, cheerful novelty-style piano pieces, and song hits. He was first known for his 1911 published Policeman’s Holiday, which was immediately a success and is still loved by brass bands today. Other pieces with the theme “Police” followed like The Police Patrol and The Burglar’s Dream.  There were also marches, nautical novelties, intermezzi, piano pieces, and potpourris.

Many of Ewing’s compositions have descriptive titles such as Fairy on the Clock, Soldier on the Shelf, or Butterflies in the Rain. Often, additions such as A Humorous Interlude or Humorous One or Two-Step indicate the cheerful character of the piece.  Ewing served in World War I from 1915 to 1919 in the London Scottish regiment.  Ewing published six ‘selections’ of ‘Silhouettes.’  Of the pieces in the set, four were written in 1916 and two in 1921.  His contributions to the field of “light chamber music” included the suites My Lady Terpsichore and Titania (both 1922) and In Arcady (1923).  Unlike his novelties Butterflies in the Rain or Fairy on the Clock, his works at the beginning of the 1930s were more modern and not suitable for marching. On exotic themes, he wrote his oriental foxtrots Moonlight on the Ganges in 1926 with lyrics written by Henry Tilsley, and When Lights Are Low in Cairo.

Ewing’s compositions were also played in Germany and were available there on gramophone records. Several were found in the 1930s in various sound films sometimes with his name in the credits and sometimes not.  A number of his songs were popular in their day.  During World War II, Ewing served from 1940 to 1944 in the Home Guard.  His works include a great many film tunes published by Sam Fox, such as “The Motley Fool,” “Stealthy Whispers,” “The Village Idiot,” among many others. He also wrote many Spanish songs. A surprising number of his piano suites were orchestrated, usually by other hands, and broadcast.  His musical impression Portrait of a Toy Soldier was orchestrated by Hubert Bath. Ewing died on March 4, 1957, at the age of 67 years at Friern Barnet, in London, England.  His Fly by the Night was later also used in cartoon series, such as Ren and Stimpy and SpongeBob Squarepants .

The following works by Montague Ewing are contained in my collection:

Fairy on the Clock

Fairies on the Moon