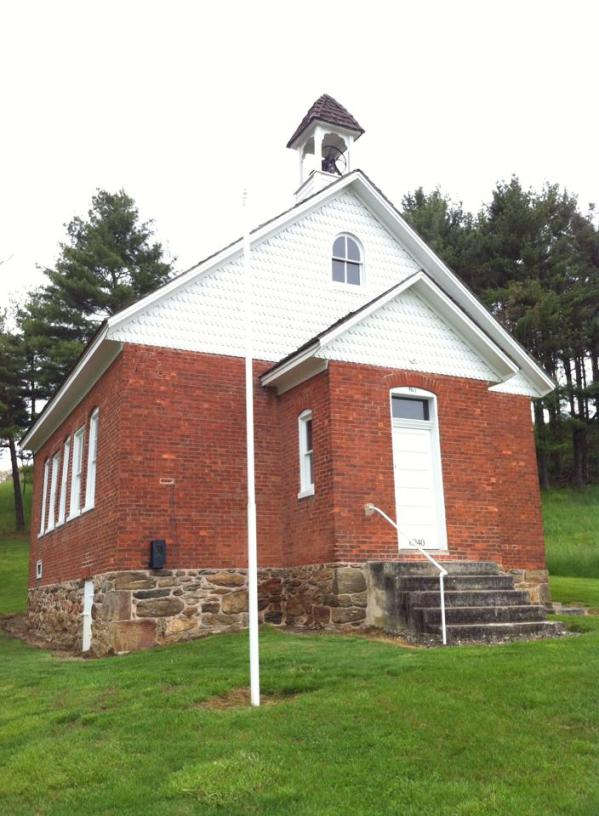 My good friend Steve Wolfgang wrote of a trip which he took with his brother to the home of his ancestors in York County, PA.  “For two brothers involved in various aspects of education most of their lives (John as an elementary school teacher and media/resource specialist and Steve teaching in several colleges and universities here and abroad), a visit to the Wolfgang School (“No. 1”) was a highlight (one of many) during the trip.  According to a deed dated August 9, 1892, Eli/Elias Wolfgang (1826-1898; great-grandson of Johann Nicolaus Wolfgang, 1711-1790) and his wife, Sarah, conveyed to the Manheim Township School District a tract of land to be used “for school purposes” exclusively, for the sum of thirty dollars. Manheim Township had been created as a part of Lancaster County in 1747 (the year of Johann Nicolaus’ marriage to Catherine Weber at the Trappe church), two years before York County itself was organized.  The Wolfgang School, a typical one-room schoolhouse, still stands across the Wolfgang School Road from the house built by Johan Nicolaus Wolfgang prior to 1750 (current address of the schoolhouse is 6240 Lineboro Road, Glen Rock, PA, 17327). Old photos show a student body of 32 pupils in 1917 and 33 in 1939; the Wolfgang School continued in operation until 1956.  Eli and his children were the last to live on the ancestral farm (4th and 5th generations) before moving into York at the turn of the 20th century. Today the house (now well preserved as part of Wellspring Farm, pictured and discussed in a prior post) and school face the rest of the old Wolfgang acreage across Lineboro Road (PA Route 516)….It was Eli’s uncle, William (originally Wilhelm), grandson of Johann Nicolaus Wolfgang, who followed the great a westward migration, settling in Indiana (Hamilton County, just north of Indianapolis) with his new bride Anna Mary Fisher in 1835, establishing the “Indiana branch” of the family. William’s grandson, George Fisher Wolfgang, was our great-grandfather.”